Although Blind, this Veteran Keeps Giving

Today, the day that would live in "infamy" when Pearl Harbor was bombed, we at KBTI launch our blog with a wonderful story of sight beyond what can be seen and service beyond the call of duty. 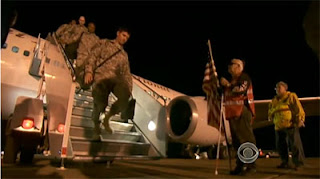 Retired Sergeant 1st Class Walt Peters served 3 tours in Vietnam and was doused with Agent Orange on several occasions but thought nothing of it. But in 1977 his eyesight began to deteriorate and was diagnosed with chemical diabetes.  Thirty surgeries later his eyesight has been reduced to mere silhouettes. Click here to view the video by CBS on YouTube.


Despite being visually impaired, Sgt Peters still takes the time to say hello and good-bye to troops at Hunter Air Force Base in Georgia.  He's there three hours before flights arrive or leave and organizes volunteers to greet the troops, make coffee and hot chocolate and hand out American flags to the troops.  View the video

Attired in his Red Cross vest, one of his many volunteer activities, Sgt Peters works tirelessly to make the troops feel welcomed and loved, unlike the greeting he received upon return from Vietnam.  Peters does this with enthusiasm and love in his heart telling people that there is a lot of love and kindness in the world, he's doing his part to pass that along.


Several years ago, a stranger asked Peters, “Now that you are losing your eyesight, what are you going to do?” Peters replied, “If I can’t see with my eyes, I’ll have to see with my heart!”
It is the active and retired military service men and women that we honor today and say "thank you" for your gift of service.
Read more about Sgt. Walt Peters on the Red Cross website: "Retired Veteran Keeps on Serving"
Posted by Randy C. at 9:01 AM